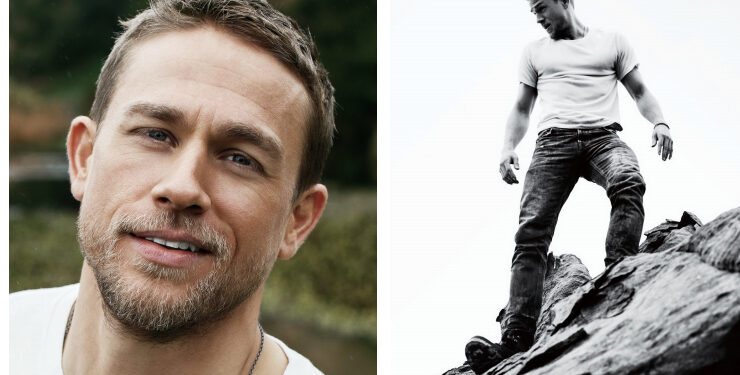 Charlie Hunnam has been introduced to the world of bjj earlier in 2016 when reports surfaced he actor was practicing along with Machado and inspired by black belt and director of the latest “King Arthur” movie. Being fairly discrete and not active on social media Hunnam was outed by his 22 push up challenge which he did in the Jean Jacques Machado rashguard.

But for the latest bout of his promotional duties related to King Arthur he had the Men’s Health reporter follow him straight to class.

According to the report to be published in the April edition of the magazine the two some started with some light talk. According to Hunnam part of the attraction to martial arts and fitness is related to vanity but there’s more than that as well:

“I’m interested in having a high fitness level across the board,” he says. “Running, swimming, jumping rope, hiking, jiu-jitsu—I try to do it all. I also try to make love as often as I can. That’s an important part of fitness. There’s no reason you can’t be active at 70. I want to run up mountains at that age.”

The writer then followed Hunnam into a jiu jitsu class. According to the report the learning curve in the class was steep. First segment was related to armbars but then moved onto chokes. The writer describes in detail being choked by Hunnam:

The pressure on my neck is firm, but I feel strangely safe with him. He’s strong but displays precise control and even a lightness of touch. Although brutal, there is an art to cutting off someone’s air supply. I double-tap his arm to signal submission. The sensei, Rigan Machado, an eighth-degree black belt member of Brazilian jiu-jitsu’s founding Gracie family, says Hunnam is a perfectionist—something I experience firsthand as we practice again and again and Hunnam fine-tunes his chokes. Nothing grounds you in the present more than being unable to breathe. Jiu-jitsu training demands focus and discipline.

It’s no surprise Hunnam had opted to practice in the company and under the guidance of Rigan Machado as Rigan is known for having invented a bjj system without sparring for his celebrity clientele:

“I created a new jiu jitsu system for people who can’t get hurt. It’s technical training. They learn jiu-jitsu and technically train, but it’s all safe. I created a type of jiu-jitsu for the Beverly Hills clientele. Competition, sparring… these guys can’t do that. I can’t even take a 1% chance of them getting hurt. I have 18 celebrities doing this program. Some guys have to sign disclosure agreements; others like Ashton Kutcher and Mickey Rourke come in regularly, while Usher comes in once and a while and Vin Diesel when he’s in town.”

Hunnam, packed on some pounds for the King Arthur: Legend of the Sword movie. According to his own statement he usually walks around at a 165 but he put on 20 pounds of muscle.
Rigan calls this style for celebrities “flow jiu jitsu”. It took him 9 years to put it together, and it has more than 700 techniques, which can be drilled and trained without risking injury.
As far as combative preparation for King Arthur goes Hunnam himself says:

“It’s not even as much the physical benefit of training; it’s the mental,” he says. “When you’re training every day in a combat discipline, it just gives you that eye of the tiger. Then if someone acts aggressively toward you, I can run all the scenarios through my head—you know, like I’m going to step to the side and put an elbow through your face.”
Hunnam sought to reimagine the noble action hero with Ritchie, himself a black belt in BJJ. “We wanted to do something a little rougher around the edges while still dealing with the rich Arthurian mythology,”

When Hunnam’s girlfriend of 11 years was cyberbullied last year, he released a video telling the perpetrators to knock it off. “The way I grew up, if you want to talk s*it, talk s*it to someone’s face and be prepared to fight.”

There’s no room for cowardliness in his approach adding in the end:

“We are supposed to be very active animals. It’s our DNA.” Hunnam derives emotional stability and clarity from his fitness. “Sweating is how I change my oil every day. I just feel happier, more positive, energized, and disciplined if I work out.” Ultimately, he says, “I train a lot every day because I’m f*cking crazy.”