Charlie Confirmed To Appear At The ‘Pacific Rim’ Comic-Con Panel

Warner Brothers have officially released their Comic-Con schedule for all of their upcoming projects that they have lined up to show at the highly anticipated event in San Diego this weekend. In addition to the official time and date of the Pacific Rim panel and signing booth, we are pleased to announce Charlie is confirmed to be there in person to help promote the film.

BURBANK, Calif., Jul 11, 2012 (BUSINESS WIRE) — Warner Bros. Pictures will once again have a major presence at this year’s Comic-Con International in San Diego, including appearances by fan-favorite stars and filmmakers from some of the Studio’s most anticipated films. Comic-Con attendees will also be treated to never-before-seen footage, including some that will be shown nowhere else. Talent from the films will also be on hand to answer questions, sign autographs, and more.

Guillermo del Toro, the acclaimed writer/director of such films as “Pan’s Labyrinth” and the “Hellboy” films, will also be on hand with a preview of his science fiction action adventure, “Pacific Rim,” opening on July 12, 2013. The film’s stars Charlie Hunnam, Rinko Kikuchi, Charlie Day and Ron Perlman will join the director on stage for the presentation, which includes never-before-seen footage cut together exclusively for Comic-Con. Fans will also have an opportunity to engage in a Q & A with del Toro and his cast.

While the Warner Bros. booth will have something to see at every minute of every day of the convention, on Saturday, July 14th, it will be the place to be to meet and greet some of the stars and filmmakers from several of the Studio’s upcoming features. Some of the autograph signing opportunities include “The Hobbit: An Unexpected Journey” stars Martin Freeman, Richard Armitage and Andy Serkis, from 11:15 a.m. to 12 noon; from “Pacific Rim,” stars Charlie Hunnam, Rinko Kikuchi, Charlie Day and Ron Perlman, and director Guillermo del Toro, from 3:55 to 4:55 p.m.; and “Man of Steel” director Zack Snyder from 5:00 to 5:30 p.m. (Please note that times are approximate. Check your schedule and other announcements for updates.)source

Check out the details of the Sons of Anarchy signing and panel at this year’s Comic-Con.

Charlie To Be at Easyriders Rodeo in Chillicothe, Ohio

For more information visit EasyRiderEvents.com or click to image below to view the full resolution flyer.

UPDATE: The event runs from August 30th to September 3rd, but thanks to the Easyrider Events Facebook Page we can now confirm Charlie will be there on September 1st ONLY. 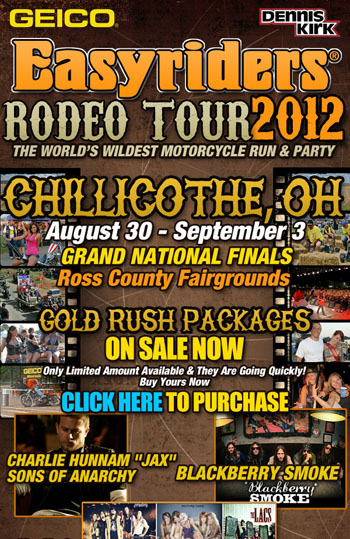 Sons of Anarchy to be at 2012 San Diego Comic Con

According to the official press release SpoilerTV posted earlier today, it seems our favorite cast is going to be at this years 2012 San Diego Comic Con!

Thanks to the The Hub Entertainment Destination Facebook page, we now know the updated times for Charlie’s appearance tomorrow at Sickies Garage Burgers and Brews Grand Opening.

Charlie will be at Sickies Garage from 7-9 p.m.! After that, he’ll be hosting the “Leather and Lace Party” in The Venue! This is all happening tomorrow, June 9th!

Charlie is scheduled to appear at Sickies Garage Burgers and Brews June 9th!

The business shares the Sickies Garage name with an established clothing line and is also borrowing its feeling and theme as well.

The atmosphere won’t be reminiscent of the 1950s style shown on the “Happy Days” television program, said Kerry Fernholz of Starmark Hospitality. Its look will be a little edgier, with a retro feel.

The quick-serve menu will feature cooked-to-order burgers and other sandwiches and 1950s-themed items, such as malts.

Sickies will be one of the first bars or restaurants in the area to feature draft beer table taps. Tables will be equipped with four taps. A server will take the initial order and will then load a certain amount of beer for the table. Customers will be able to refill their glasses from the taps as they’re ready. Servers will check back periodically, but the advantage is that customers won’t have to wait for the server for refills.

Specific marketing and events are planned to attract car enthusiasts. Fernholz said events such as car and hot rod shows and drive-in theater nights during which movies are projected on an exterior wall are planned.

Celebrity appearances are planned at grand opening events on June 8 and 9.

Lee Rocker of The Stray Cats will appear June 8.

Charlie Hunnam, who plays Jax Teller on the FX series “Sons of Anarchy,” will appear June 9