Meet Charlie at the Iowa Grand Rally this June!

You will have three chances to meet Charlie at the Iowa Grand Rally this June!

Private Meet & Greet with Charlie #1 – $115 (Limit 2 tickets per account)
Saturday, June 1st at 12PM in the Featherlite Suite located in the Newton Club

Private Meet & Greet with Charlie #2 – $115 (Limit 2 tickets per account)
Saturday, June 1st at 2PM in the Featherlite Suite located in the Newton Club

Public Meet & Greet with Charlie #2 – $5 (Per autograph)
Saturday, June 1st at 4PM in the Lower Level of the Newton Club

You can find out more information over at IOWAGRANDRALLY.COM

The news comes courtesy of VARIETY.COM

Though “Pacific Rim” comes out later this year, Charlie Hunnam is ready to re-team with his director as the thesp is in negotiations to star in Guillermo del Toro’s “Crimson Peak.”

Emma Stone is also in negotiations to co-star with del Toro on board to helm.

Plot details are being kept under wraps as del Toro and Lucinda Coxon rewrite the original script he penned with Matthew Robbins.

Legendary will produce and be a participating financing partner on the movie, with Universal Pictures retaining an option to finance at a later date. The film is set to begin shooting in February 2014.

Del Toro is no stranger to reteaming with actors on multiple projects, having worked with Hunnam’s “Sons of Anarchy” co-star Ron Perlman on four films including Universal’s “Hellboy” series. 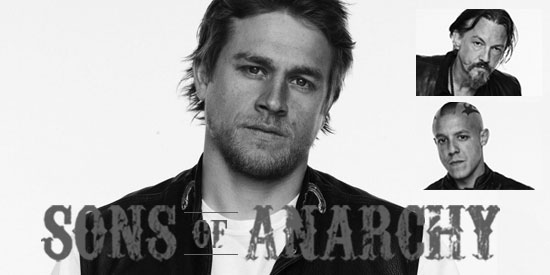 It appears that Charlie is no longer going to be appearing at the Chicago Motorcycle Show as I previously reported back in late October. Check out what Paragon Promotions posted on their site below:

Theo Rossi “Juice” and Tommy Flanagan “Chibbs”, to replace Charlie Hunnam at Chicago Motorcycle Show. An unexpected movie deal has changed Charlie’s availability and he will not be able to attend the Chicago show but in true Pres style. He has selected two representatives from sons of anarchy to come meet the fans in his place. Theo Rossi ”Juice” and Tommy Flanagan “Chibbs” will be on location Saturday to meet and greet with fans, sign autographs and represent SOA.

Thanks to our Sponsor Miller High Life we will also be able to expand our VIP experience to support 100 more fans for a private meet and greet with Theo and Tommy. Miller will also be providing Free Beer in the VIP lounge for all VIP’S

Details of the changes are still being finalized a full schedule of appearance times etc will be updated after Christmas.

Thanks to visitor, Ashley, for the heads up. 🙂

Charlie Talks DEADFALL, SONS OF ANARCHY Season 5, PACIFIC RIM, and Writing a Movie About a Drug Lord for WB and Legendary

Don’t miss Charlie’s entire interview in full over at COLLIDER.COM

Collider: You’ve been playing a really interesting assortment of characters lately. Has the selection of projects you’ve done been intentional, in any way?
CHARLIE HUNNAM: I’ve just been trying to keep it fresh. Actually, that’s not even true. I haven’t been trying to do anything. I’ve just been going where my heart is. I have no big plan, other than unless I want to see the movie, I don’t want to act in it.

Was that really sparked by the departure of Ryan Hurst and the loss of Opie?
HUNNAM: For me, it had a massive effect, losing Ryan Hurst on the show. It had a really, really profound effect on me, creatively and personally. I think a lot of that was in line with what Jax would have been feeling, but also made me feel a real responsibility to Ryan Hurst, as me, to keep doing this and making sure that we get ours. I felt like we were headed, and Jax felt like we were headed, to a place where it was going to be me and Opie at the head of the table, and that got taken from us. I’ve had the deepest creative experience of my life on Sons of Anarchy, just because of the time we’ve spent playing these characters. They just get ingrained. Those relationships and those guys that I’ve worked with have just become my brothers and my family, so that was a very, very hard pill to swallow, for us to lose Opie.

And you’re currently writing something, right now?
HUNNAM: That’s the main reason why I took this six months off. I have this true story that I own the rights to, that I’m writing right now, and I just think it could be spectacular. I love this guy. It’s the true story of a blonde-haired, blue-eyed, all-American Texas player who was dirt poor and grew up in Laredo. At eight or nine years old, he just had a total existential crisis. He looked around and was like, “This is shit! Where’s the intention? Everybody is just a slave to the social and economic demands of their life. Where’s the life here?” He said, “Fuck it! This is not going to be my life.” From eight to 17, he never smoked a cigarette, never drank a beer, never had a cup of coffee, and didn’t even look at a joint. He had total discipline. He wanted to get himself a football scholarship, go to college, use his time at college to get an education, escape poverty and live a meaningful life. He got the football scholarship to an Ivy League school when he was 17.

Ten days after he got the football scholarship, he got into an accident in his car and got charged with criminally negligent homicide because the other person died. He got sent to prison for two years, and he came out at 19 with all of that discipline and passion and hope for his future, and nowhere to put it. He said, “Fuck it! I’m going to start dealing drugs.” By the time he was 27, he was running the third biggest drug cartel in Mexico. It’s a fucking crazy story of the American dream gone wrong and the lengths that people will go to, to feel as though they’ve escaped the drudgery of everyday civilization.

Is that something you’re also looking to act in?
HUNNAM: I don’t know if I’m going to act in it or not. I’m making it with Legendary and Warner Bros. They bought the idea from me, and I’m writing it. We’ll see what we’re going to do. I really want to write it and produce it, so it gets made the way I want it to get made. I also have two other films in development that I’m writing and producing. And then, I have another one in development that I already have been working on for a long time. And then, the fifth thing I’m going to write is this film that I have for Tommy Flanagan, that I want to direct for him to star in. We want to go and make that for a million bucks in Britain. Tommy is just amazing. I just think he’s phenomenal. Some of the work he did this season (on Sons of Anarchy) was just breathtaking.