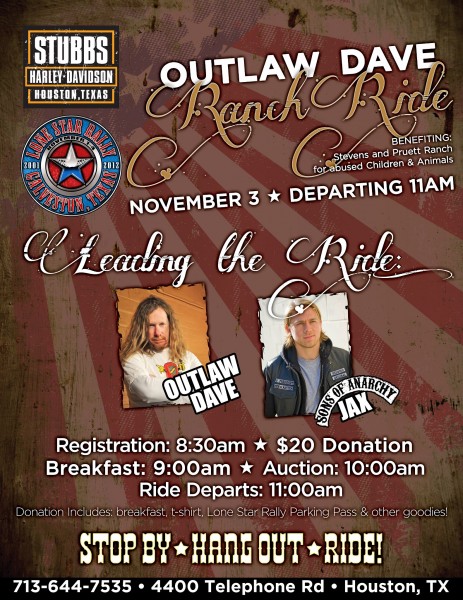 The ride will be held on November 3rd and starts at Stubbs Harley-Davidson in Houston Texas and ends at the Lone Star Rally. Police Escorted the whole way to Galveston. If you want to be closer to the front, along with the VIP guests you should get there early!

Be sure to check out STUBBS Harley-Davidson on Facebook!

E!Online: ‘Ablation’ “Is a big one that cannot be missed.”

Check out what Watch with Kristen had to say about next week’s Sons of Anarchy!

Brad in Nashville: Sons of Anarchy is killing it this season. I need to know about next week’s episode!
It’s hard to imagine SOA getting any better, but next week’s episode is a big one that cannot be missed. A major secret will be revealed, and…wait for it…there’s a kidnapping! And based on the circumstances surrounding the abduction, we fear for the life of the individual who gets snatched up. We can’t wait to hear what you fans make of it!

Check out Charlie’s entire interview, as well as an interview with his Frankie Go Boom co-stars Ron Perlman and Lizzy Caplan over at COMINGSOON.NET

CS: Is it a tricky balance for you knowing that the audience both wants to sympathize as well as see bad things happen just because they’re funny?
Hunnam: This was an exercise in trust like no other I’ve every experienced in that I went into this with the awareness that I had no idea what I was doing. I didn’t know how comedy worked or how to do it or how to make it funny if it wasn’t working naturally. So I just really surrendered myself. I said to Jordan, “Look, I’m putting all my trust in you in a way that I never have with a director before. I don’t know this world. I need to trust that your barometer of what’s funny and what’s working is going to be true.” It really did come down to that, specifically to landing the jokes. If I made Jordan laugh, that was good enough for me. Everything I did I didn’t think was funny. It was really about trusting him completely. Maybe that wasn’t such a good idea. (Laughs)

CS: There’s a sweet relationship between Frankie and Phyllis. Can you talk about building that with Ron?
Hunnam: I think that just innately happened because me and Ron have so much history. It is something that, in the past, I’ve been conscious of and have worked towards. On “Sons,” I’m really conscious of that and how really working closely for five years has intensified the performances on screen. But yeah, it’s something that one, as an actor, really thinks about. I did a film some years ago, “Green Street Hooligans,” and there’s an actor in that, Leo Gregory, who plays a kind of Judas character. In the beginning of that film, we only have three scenes together where we’re best friends and you can see how much we love each other before the relationship goes bad. You have to feel that lack of friendship and hostility. Between two actors that don’t know each other that well, it’s very easy to play the hostility, but to play the friendship within the hostility requires you to know that person a little bit better. To find the intricacies. I was very aware of that and I said, “Listen, this isn’t going to work. We have three scenes to show how well we know one another. If we don’t show that, it’s going to fall flat on its face.” So I reached out to him and said, “Dude, I think that we should spend a month together before shooting. Why don’t you come to LA and live with me for a month? Or I can come to London and live with you.” He still lived with his mum in London and he said, “F–k that. You ain’t coming to live with me and my mum. I’ll come to LA.” He came to LA and we just hung out. We smoked together every day and went to the gym and trained and talked about s–t. We went back to England together. We went to football matches. That’s one of the things I’m most proud of because, if you watch for just that moment on screen, he does something where he lights a cigarette, before he puts his box away, he pulls out a cigarette and hands me one. Without even looking, I just take it. It’s those moments that tell such a huge story on screen. It’s a huge challenge, always, as an actor.

CS: What do you look for now in terms of roles?
Hunnam: I feel every bit as much a writer as I am an actor. I’m actually probably more a writer than I am an actor. So I’ve been writing a lot. I have a film that I want to direct. A very, very small film that I want to direct in two years, starring Tommy Flanagan from “Sons of Anarchy.” I actually got Tommy the role of my brother in “Green Street Hooligans” and then, long story, he ended up not being able to do the movie. But I’ve had a long relationship with Tommy and I just think he’s one of the most extraordinarly gifted actors out there. He’s going to play the lead in this film that I want to direct. Then I have three other films that I’m writing. One is for me to star in and two that I just want to set up and get out there into the world. That’s a lot of the plan for myself in the future. To try and evolve into a writer/director. Specifically, though, there aren’t so many roles that I’m looking for as much as the opportunity to work with great directors. I feel like I have so much to learn. I feel more and more proud of the work that I’ve been doing, but I feel like getting to work with those A-list directors will really kind of kick my game up and allow me to turn in performances that I want to. I really care about acting and want to be as good as I can be. That is not always just down to the actor. You need a strong director and a strong writer and a strong editor.

Good news East Coast! Another appearance has been scheduled, and this time it’s in Atlanta, Georgia! Charlie is now scheduled to be at Reign Nightclub and host their One-Year Anniversary party on Saturday November 17th! – you should find all the details you need for this upcoming event on the flyer below! 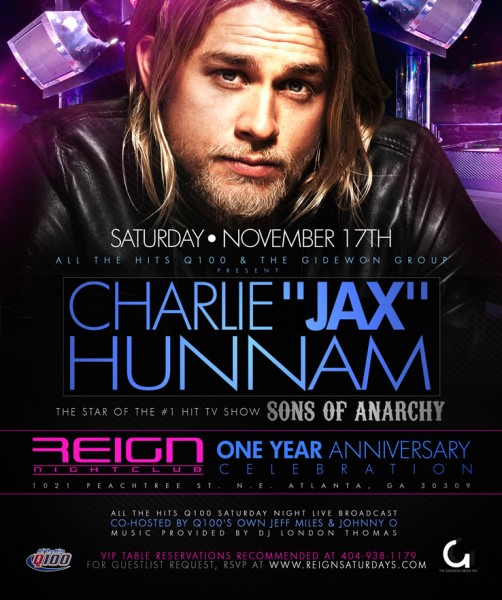 The guest list referred to on the eflyer is for free admission before midnight. The signup will be active on REIGNSATURDAYS.COM beginning tomorrow (Tuesday) 9am east coast time. Charlie is said to be arriving that evening around 11:30pm/11:45pm, so don’t be late!

If you miss the chance to RSVP for the free admission before midnight, then be sure to purchase a ticket to the event at EVENTBRITE.COM