You can check out the official website of the Boot Ride for all the info you need on when and where the rally is taking place and how you can participate.

The Boot Girls invite YOU to get YOUR official Boot Campaign boots on and coast down the Sunset Strip for the 2nd annual Boot Ride, with the stars from FX’s Sons of Anarchy leading the way. We invite non-riders to get YOUR boots on too! Join us at The Happy Ending Bar & Restaurant to see the riders roll in, and rock out to a live performance by Blackberry Smoke during the Rally. Proceeds benefit our military through the Boot Campaign’s partner charities.

Don’t Miss Your Chance to Meet Charlie this November!

For more information check out the official site LonestarRally.com 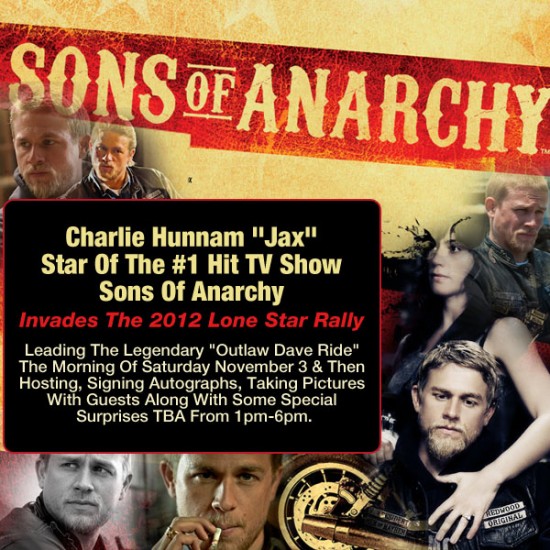 Check out what Entertainment Weekly had to say in their Spoiler Room this week when asked about Sons of Anarchy’s upcoming fifth season!

You have a choice in scoopage: either NCIS: LA, Sons of Anarchy, or Maggie on The Newsroom. – Amy
I’ll take Sons because I just saw the season opener. By the way: HOLY S–T! Damon Pope’s revenge against SAMCRO kicks off in a big way — and there will be an event that will change one member’s life forever. Meanwhile, Jax and Tara fans will enjoy the second episode. I won’t say why.

Speaking with Screen Rant at San Diego Comic-Con last weekend, actor Charlie Hunnam (Sons Of Anarchy) talked about Pacific Rim, the upcoming science fiction epic directed by Guillermo del Toro. In the film, Hunnam’s character, Raleigh Antrobus, and Rinko Kikuchi’s character, Mako Mori, “use a “neural bridge” to link their minds in order to co-pilot an old model robot that could turn out to be humanity’s greatest hope.” Hunnam describes the basic story of the film as a classic love story, but with a sci-fi twist.

“Well, there’s this whole imminent apocalypse that really distracts from a lot of the psychological stuff going on between them, but it’s really more of a process of both of us opening up our hearts again enough to be able to trust somebody; it’s a love story without a love story. It’s about all of the necessary elements of love without arriving at love itself: I need to trust [Mako] and respect her and open up my mind to her.

“It’s so fascinating, the whole caveat of how we operate this machine – which is through a neurological bridge – we’re neurologically connected. So everything in my head is available to [Mako] – and vice versa. If you imagine that – I mean, we’re all very careful about how we present ourselves and what we say, and how much of ourselves we let out. And to just allow someone into your brain, to give them complete access to every thought, and memory, and f*#cked up thing you ever did – and every great thing you ever did – its really a big proposition. And for two very damaged people who have decided they’re going to keep it all inside because they’re terrible human beings who have made so many mistakes – to go through a process of opening up enough to allow someone access to your head – it’s really the heart of this film.”

Charlie Talks Sons of Anarchy with TV Fanatic at Comic-Con