KING OF THE STREETS. English actor Charlie Hunnam chats with DA MAN about the new, epic stories he will bring to life in the months to come

When you’ve played one of TV’s most popular anti-heroes and the most badass giant robot pilot ever to grace the silver screen, how can you ever top that? Well, Charlie Hunnam—who played outlaw biker Jackson Teller in hit TV series “Sons of Anarchy” and Jaeger pilot Raleigh Becket in the widely-acclaimed “Pacific Rim,” among many others—is set to do just that this year with at least three major movie appearances. It starts with the epic “The Lost City of Z” which is based on a true story this April, followed closely by “King Arthur: Legend of the Sword” where Hunnam brings out a more street-smart version of the legendary king this May. Later this year, he will also appear in “Papillon,” a remake of the immensely popular 1973 movie of the same name. And here to share the stories-behind-the-stories of these highly-anticipated titles is the star of all three himself. 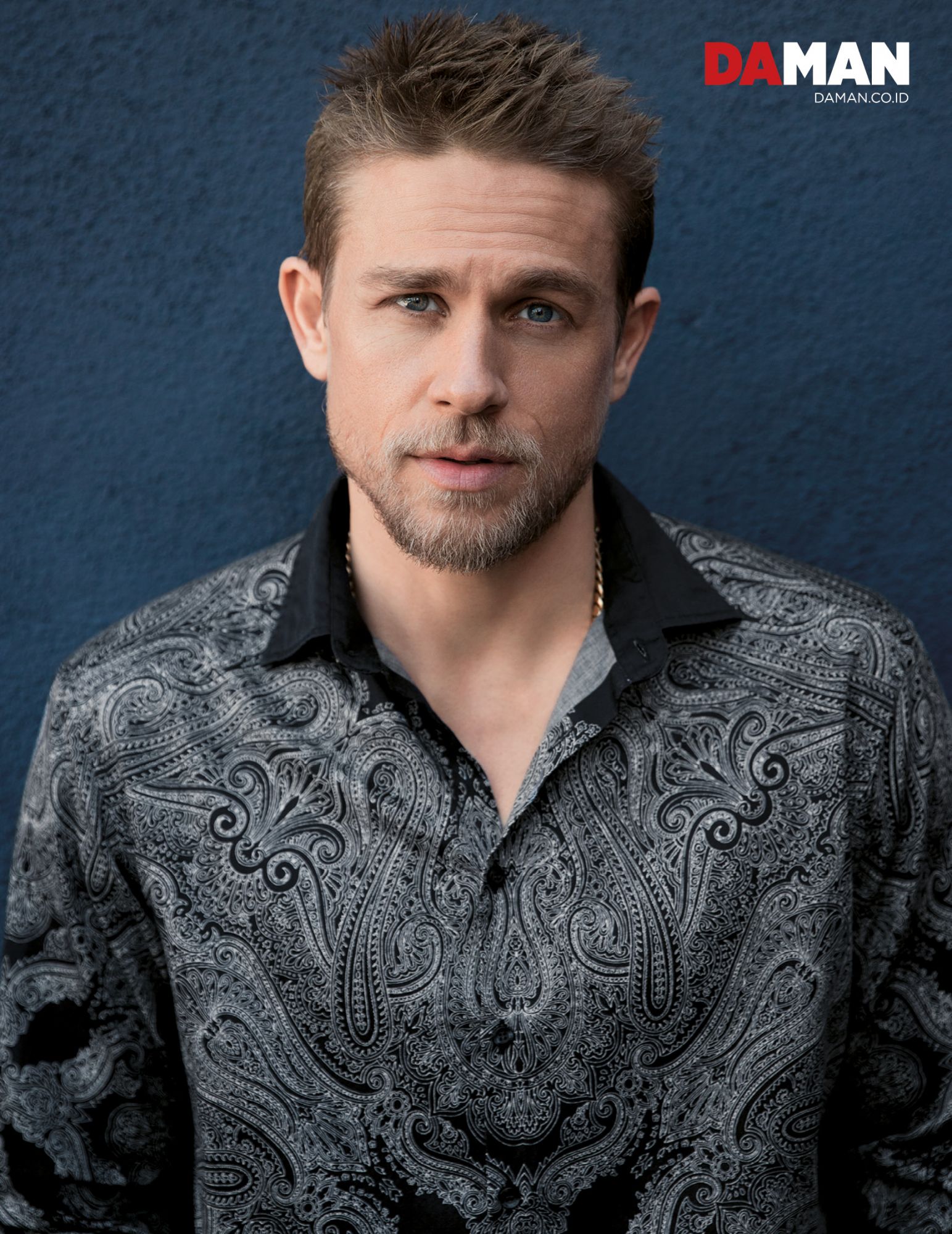 DA MAN: Hi, Charlie. “King Arthur: Legend of the Sword” is set to hit theaters this May. What would you say is the number-one reason to go see this movie when it comes out?
Charlie Hunnam: Because it’s a cool, fun, fresh, original, badass, two-hour extravaganza. We have magic, fighting, pretty girls, pretty boys and a sh-tload of laughs. [Chuckles] If I had to sum it up with one adjective it would be “fun!”

DA MAN: We did a bit of research, and found that film adaptations of Arthurian legend date back all the way to 1904. What will this 2017 version do differently from its predecessors?
Charlie Hunnam: Guy’s [director Guy Ritchie] sensibility as a director is very contemporary, so the style and tone of the film is completely fresh for this genre, and the story itself is very different from any of its predecessors. Arthur has always been portrayed as the noble man, who goes on a noble quest to become a noble king. Guy said, “let’s make Arthur a motherf—-r.” We are only telling the first chapter of the story, so making Arthur conflicted, angry and scared at the beginning gives greater breadth to his journey and makes for a more interesting character.

DA MAN: You famously said that you would do 500 push-ups a day to prepare yourself for the role. And you also offered to fight the other two finalists—Henry Cavill and Jai Courtney, if we’re not mistaken—when the issue of King Arthur’s physicality came up again and again. Were you really that confident that you could take on Superman and Captain Boomerang at once?
Charlie Hunnam: [Laughs] Are you trying to get me into a fight? Okay, I’ll answer in order. Yes, I did an enormous amount of push-ups while making this film. Not always 500, sometimes less, sometimes more. The most I ever did was 1,050 in a day. There were also days I did none. With regards to fighting the competition … Sure, I’d take them both on. I actually didn’t know who the other dudes were but I love a good fight, and Guy kept pestering me about how skinny I was at the time. So, I said “F–k it, let me fight for the role.” All in good fun, though. I respect both those guys; I’m not trying to start any trouble. In the immortal words of RZA, “I’m vegetarian, b—h, I don’t want the beef.”

DA MAN: On a more serious note, you did bulk up impressively. How, exactly, did you do it?
Charlie Hunnam: In the usual way, nothing exciting. I ate enormous amounts of food and worked out like a bastard every day. I prefer calisthenic-style exercises, so the majority of my training was pull-ups, push-ups, dips and non-weighted squats. I also boxed every day and did a bit of jiu-jitsu. 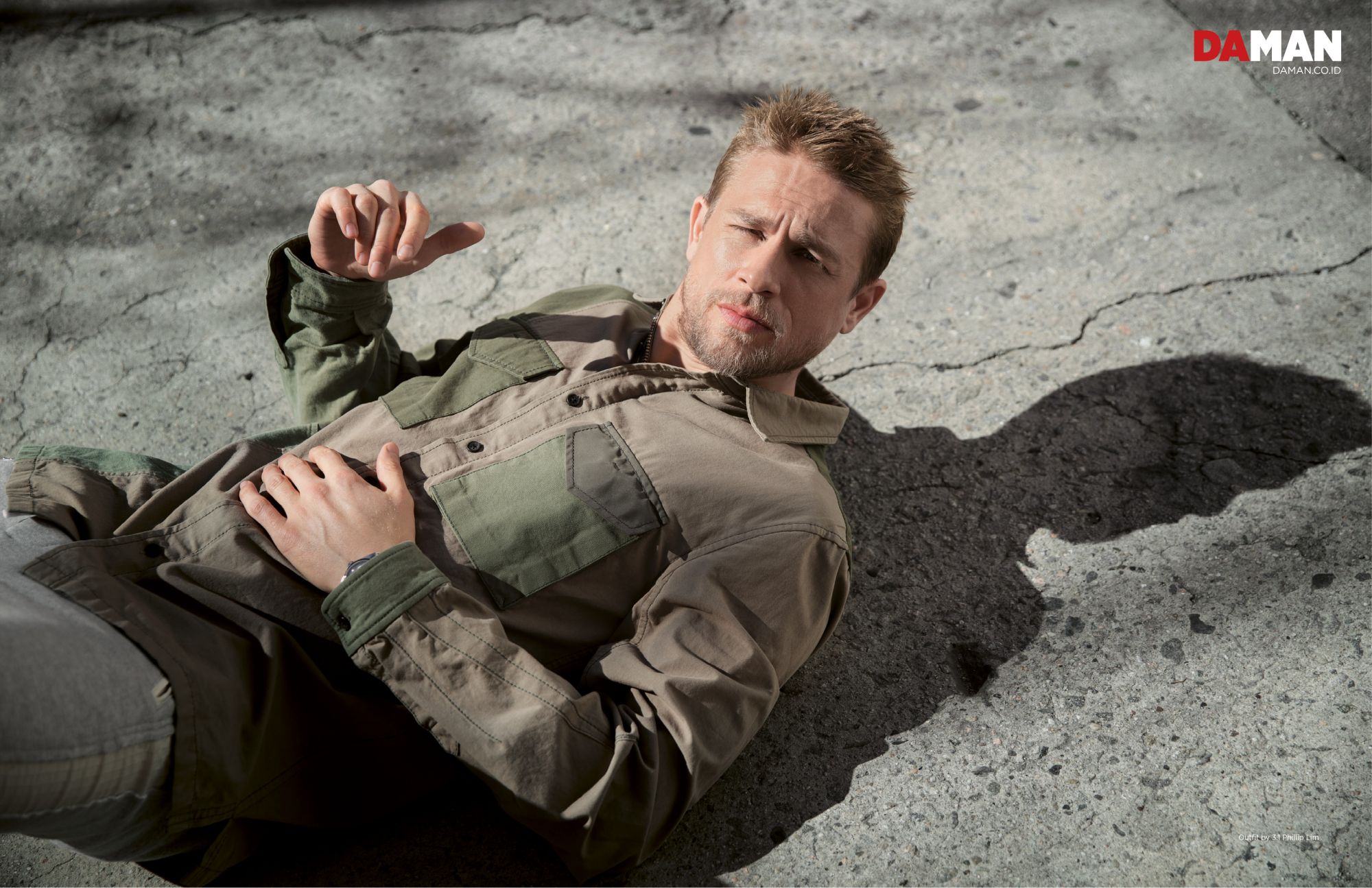 DA MAN: In playing the legendary Arthur Pendragon, what kind of ideas did you incorporate into your depiction of the character? Or perhaps: How did you create your King Arthur?
Charlie Hunnam: Guy and I wanted him to be a regular lad from the streets who has carved out a nice little life for himself. He’s cocky as hell, which comes partly from the confidence that he is living by his wits and fists and doing very well, but also partly as a defense mechanism to cover the fear he lives with from his internal demons. Overcoming those demons and knowing that one’s own ego is our only real obstacle was the most exciting element in our exploration of who our Arthur is. I looked at [UFC Lightweight Champion] Conor McGregor for a lot for inspiration. He’s a cocky dude, but also clearly a great student of the laws of self-actualization. I saw an interview where he was talking about his competition and said something like, “There is no opponent; I’m fighting myself in the octagon.” That’s basically the lesson that Arthur has to learn in this film.

DA MAN: Before appearing in cinemas as King Arthur, though, we’ll see you playing as Colonel Percy Fawcett in “The Lost City of Z,” which is based on a true story. Can you give us a short primer on what the movie is all about?
Charlie Hunnam: Like you say, “The Lost City of Z” is the true story of Percy Fawcett, who was a great British explorer at the beginning of the 20th century. He was actually the inspiration for Indiana Jones. Our film centers on his obsession to find and prove the existence of El Dorado—or as he called it, the Lost City of Z [pronounced “zed”]—an ancient sophisticated civilization deep in the heart of the Amazon.

DA MAN: Early reviews from critics who have seen the movie have been almost universally positive. In your opinion, what is it that makes “The Lost City of Z” a great movie?
Charlie Hunnam: It’s a great story with deep relatable themes. It’s about family, hope, determination and ultimately the price of obsession and the conflict that personal fulfillment creates between the other responsibilities in our lives—in Percy’s case: being a good father and husband. In addition to being a great story, it is magnificently directed by James Gray. In a film environment dominated by special effects-driven spectacles and archetypal central characters, as opposed to real multi-dimensional people, this film is a return to classic epic story telling. I think audiences are hungry once again for this type of filmmaking.

DA MAN: What went through your mind when you first learned that you would spend a couple of months in
Colombia for filming the jungle scenes?
Charlie Hunnam: I was overjoyed by the opportunity to be part of this type of filmmaking and determined to do everything in my power to make my contribution to the film as impactful as possible. Shooting in the jungles of Colombia just added to my ability to commit 100 percent to the process, as we were completely removed from the distractions of our everyday lives. On a non-work level, it was also wonderful to experience that environment. We went to places that were far off the travel guide. 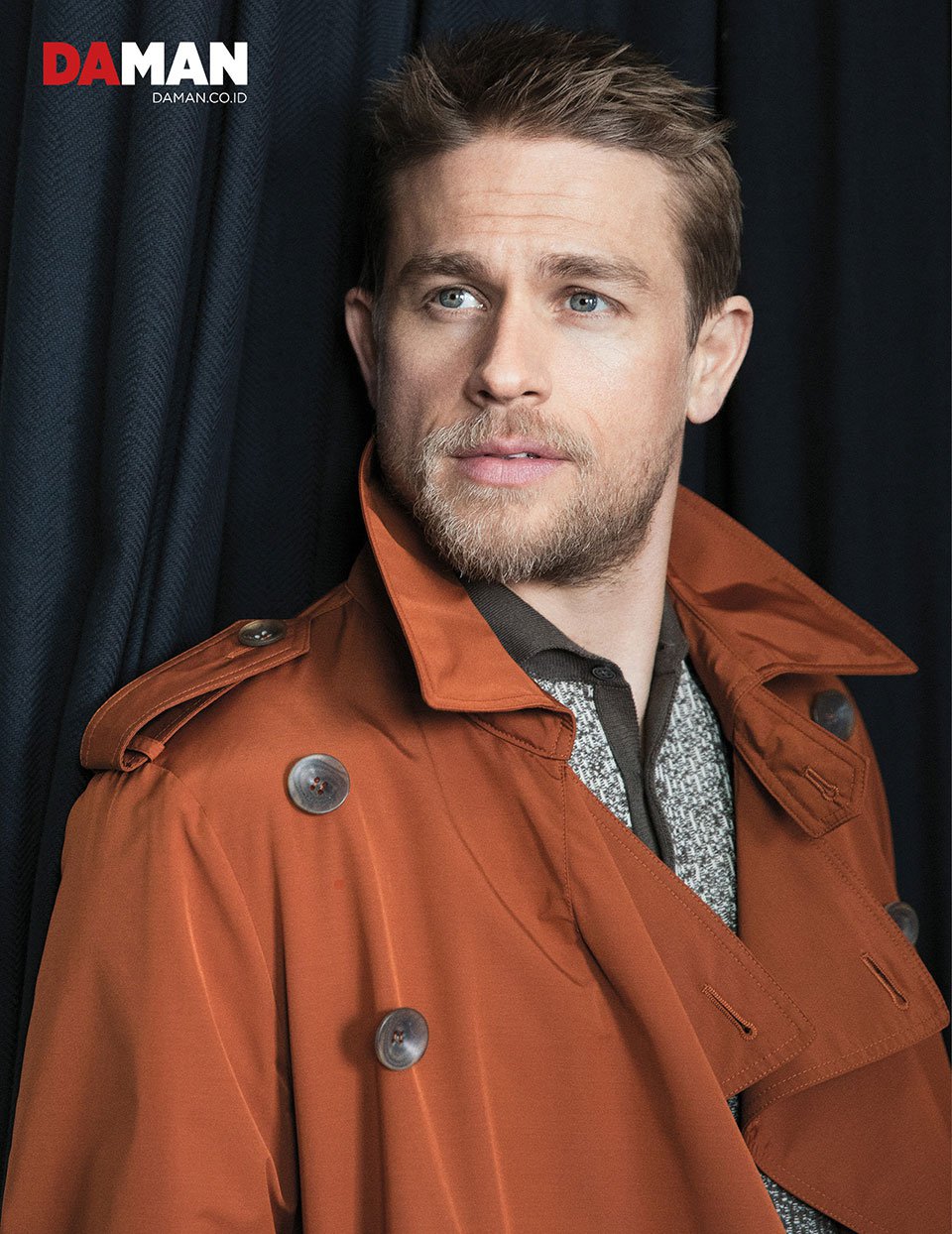 DA MAN: On the flip side, what went through your mind when you learned that your Colombian adventure was about to end?
Charlie Hunnam: There is always a period of mourning to have to let a character go after spending so much time getting to know, living with and hopefully coming to love that person. Plus, the deeper one gets into a process, the more distance is created from one’s personal life. Reintegration can be extremely difficult. This was one of the deepest experiences I have had, so the extrication was accordingly painful. But, I was also proud of what we had done and knew that we had put everything we had to give to the process, so there was also a sense of satisfaction.

DA: You’re also set to appear in “Papillon,” which is a remake of a movie adaptation of a novel about the “75 percent-true” story of Henri Charrière. The book was an instant bestseller while the 1973 movie was a critical and commercial success. How do you think will moviegoers of 2017 react to this new remake?
Charlie Hunnam: I was initially reticent about the idea of remaking such a beloved film, but I was also a great fan of the director, Michael Noer. After several conversations with Michael we decided that because this is based on a “75-percent true” story, we had the opportunity to make an independent adaptation, exploring what interested us about the story and the world of the French Guiana prison colony. This liberated us from the concept of a remake. The process became very exciting after that and Michael and I spent a great deal of time researching that world to find what interested us most and how to make this story as relevant as possible to a modern audience. So, to answer your question more succinctly, I hope audiences will receive our film on its own merit and not get caught up in comparisons to the original adaptation.

DA: In real life as well as in the novel and the 1973 movie, Henri Charrière does earn his happy ending. Still, his adventure is quite tragic. How did you prepare to step into the shoes of a man like that?
Charlie Hunnam: I knew the process was going to be emotionally exacting. One thing that helped enormously was that we shot the film sequentially. That allowed for the relationship with the other characters and that harsh environment to grow day by day. I had to lose a lot of weight, which I had just done on my previous film, “The Lost City of Z,” so I knew that that in and of itself creates an emotional state that can be very helpful. Also, there is always a sense of responsibility that comes with playing real people that keeps one very focused. At the end of the day, you just have to show up and give it everything you have and hope for the best.

DA: Of all the movies and TV shows you’ve done prior to these three, which ones have become the most important milestones in your career?
Charlie Hunnam: “Sons of Anarchy” was by far the most important. I became a man working on that show, and the majority of what I know about storytelling and acting I learned from that experience.

DA: Last question: What was the most inspiring, badass or otherwise awesome line that you ever had the pleasure of saying in front of a camera?
Charlie Hunnam: In “Cold Mountain,” right before I killed the hero of the film, played by Jude Law. We are on the cusp of having a shoot-out and I say to him:

And then I shoot him. Boom.

‘Sons Of Anarchy’ Scripts Are In, Filled With Angst and Revenge For Jax

Press/Interview: Charlie Hunnam Talks Changing His Hair and Beard for ‘Shantaram’ : ‘I Like the Man Bun!’

Charlie’s biker is riding a tightrope in ‘Sons of Anarchy’