Photos: Shantaram 1×08 “Like in the Time of Cholera” Screen Captures —  Nov 19th
Press/Interview: Charlie Hunnam Discusses Being a Cat Person, His Appreciation For His iPod and More with The New York Times —  Nov 15th
Press/Interview: The Cast of ‘Shantaram’ Sit Down for a Q&A With Cinema Daily US —  Nov 13th
charlie-hunnam.net
Welcome to 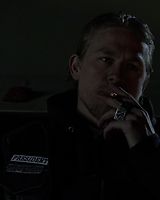 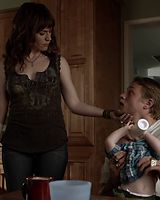 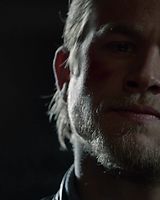 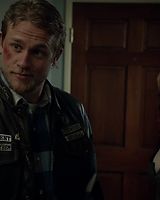 Don’t miss what Leanne’s Spoiler List had to say about the upcoming deaths this season on Sons of Anarchy!

Sons of Anarchy: Death is coming for the fellas of FX — and it certainly won’t be pretty. Producer Paris Barclay says that there will be “quite a few empty seats at the table” by season’s end. Yikes! And unfortunately, star-slash-baddie Ron Perlman fears he might be one of them. “I’ve worried [about being killed off] pretty much for the last three seasons,” Perlman says. “My deeds get more and more dastardly, and more and more heinous. I’m fodder, baby. A lot of people want to take me out, and not for coffee.” [Insert your version of “oh snap!” here.]

Losing Clay would be a major bummer, but Barclay says this season’s deaths will all be for the greater good. “We’re starting to develop the story of Jax (Charlie Hunnam) really taking control of the club,” he says. “There are going to have to be certain transitions to make that happen, and that’s what you’re going to see in Season 5.” Looking forward to it!

You better hold on to your seats because tonight is the night! You will NOT want to miss the Fifth Season Premiere of Sons of Anarchy on FX! So make sure your parked in front of your television at 10 PM and tune in!

And in case you miss it or your DVR has a vendetta against you, you can catch the premiere two more times tonight when it replays immediately after the first airing at 11:30pm-1am and then again at 1am-2:30am!

Don’t miss the LIVE premiere chat with the cast which kicks off at 9PM eastern time and 6PM pacific time before the east coast premiere!

In the latest edition of Ask Ausiello, he had this to say about the amount of causalities this season is going to rack up. I don’t know about you guys, but I’m so not ready for that!

Question: Do I need to prepare myself for a high body count on Sons of Anarchy this season? —Gerald
Ausiello: Yep. And unlike Season 4’s relatively benign list of casualties, Season 5 will whack “people you’re very attached to,” warns exec producer Paris Barclay. “I’m not naming names, but this is the season where the reckoning has to come… You’ll have to say goodbye.”

Maggie Siff spoke with Vulture on Sons of Anarchy, Riding Motorcycles, Tight Jeans, and Cleavage. During which she mentions Jax and Tara’s inevitable wedding. Definitely worth a read, especially if you want more insight into Tara’s darker path this season.

Tara and Jax are raising two kids together, so it’s probably not too much of a spoiler to talk about the inevitable wedding.
“I liked that scene. Getting married by the seat of your pants in a brothel is so unromantic, but I felt that the scene, the way it was written, was actually very sweet and moving and got something about the show that I love. The spirit of family comes through. The circumstances are gnarly, but you always have to have escorts and prostitutes running around on Sons of Anarchy. [Laughs.] Tara doesn’t feel threatened by other women these days, I have to say. She’s more confident in the relationship and should anything transpire with any of the scantily clad ladies, she can handle it. She laid down the law with Jax in season two or three, so he knows that’s not okay. I think Kurt [Sutter] has done an interesting job of making the question of marriage and partnership a real one.”

While you’re at it check out more great reads about the fifth season of Sons of Anarchy below!

Show creator Kurt Sutter talks ‘Shades of Grey’ in New Season with BuzzFocus and then talks Outlaws, Loyalty, and Racial Stereotypes with Complex.

While Maggie Siff discusses whether Tara is the new and improved Gemma with Zap2It.

Check out what Charlie had to say about the upcoming fifth season of Sons of Anarchy when The Hollywood Reporter interviewed him at the season five premiere screening this past weekend.

“I think that it’s a really fresh season,” Hunnam told The Hollywood Reporter. “It feels unlike any other season before just by virtue of the fact that Jax is president now. Immediately, the club went from the dictatorship that it has developed into back to the democracy that it always needed to be.”

2. Jax Is at the Head of the Table
One of the biggest changes in season five is that Clay, now feeble and recovering, will not be at the head of the SAMCRO table. Instead, Jax will take over.

“I think he’s an excellent leader,” Hunnam told THR. “He really has had to watch Clay make so many mistakes over the years, and he’s really learned from those mistakes.”

However, leading a club that is threatened by the terrifying Damon Pope (Harold Perrineau) and is struggling to complete its drug runs is definitely taxing on the new leader.

“I think one of the things he hadn’t anticipated was just how difficult it is to not make those mistakes,” Hunnam said. “Absolute power corrupts absolutely, and I think Jax is starting to appreciate that now.”

As for Jax and Tara’s relationship, this is what Maggie had to say on the subject:

As for her relationship with Jax, Siff called it the “ultimate bad-boy love story.” That story will continue to be written this season as Jax deals with running the club.

“I think they’re kind of fated, they’re meant to be together,” Siff told THR. “I think that they both feel that in some way that doesn’t always make a lot of sense but kind of demands that she keep showing up.”

You can read the article in full over at The Hollywood Reporter as the rest of the cast, including series creator Kurt Sutter discuss the explosive new season!