How did you come to work together?

DJIMON HOUNSOU: The call came in, and my agent said, “Charlie Hunnam,” “The guy from the biker show?” “Yeah,” my agents said. “He’s nice. He’s really cool. You’ll like him!” That was it. I came and met Charlie and it was a great rapport. Some people you just meet and have an affinity for. [There’s] no ego. It was a nice rapport.

CHARLIE HUNNAM: We did something strange and wonderful. I didn’t think it was gonna work at all, but it did. Guy had this wacky idea that he wanted to take an afternoon before we started working and shoot the whole film in four hours on two or three cameras and in a room all in black. We shot the whole film, and that’s where we met. That’s where most of the cast met. It was a baptism of fire. It was such a high-energy, sort of anxiety-inducing experience.

HOUNSOU: I landed the night before and I got here and met quickly for wardrobe, and I [heard] we had a video shoot the next morning. So I was highly stressed to say the least.

HUNNAM: But we came down really well right away. As soon as I came up and shook your hand I was like, “Ah, this motherfucker’s cool.” [Laughs.]

We’ve seen many versions of the King Arthur story. This one has a contemporary sensibility. Can you talk about what we’ll be seeing that we haven’t seen before?

HOUNSOU: The one obvious thing that you’ll see more of in this story is that it’s really about the Knights of the Round Table. How all of those knights came to make the king who he is.

HUNNAM: : As you would imagine, it’s the origin story. It’s the sort of Arthur origin story, of his rise to the throne. So it’s a reinvention certainly of the periods between him being estranged from his family and reuniting with his destiny, with sort of the royal lineage. It’s a very different sort of rendering. Much grimmer and grittier, and in a certain way probably much more modern. The camaraderie feels sort of modern and easily recognizable as boys’ banter, the sort of stuff Guy does very well. But I feel like the world and the pace of the whole thing feels very period. I don’t think it feels like an uber modern rendering of it.

Was it intimidating to take on a role that has such a history to it?

HUNNAM: No, if you think about that stuff you’ll completely get head-fucked. So I just don’t think about that at all. I just try to get to know the character on my own terms. Guy and I discussed a great deal who he was and what sort of version we found, between the two of us, most exciting. But I’m very familiar with Arthurian legend. In fact, my girlfriend is called Morgana, and one of my favorite films, that actually led me to want to become an actor, was Excalibur. I watched Excalibur ad nauseum as a child. So I’m very familiar with the world. But I just decided not to go back. I’d read The Once and Future King years ago, and I’ve always loved this world. But I decided to just try to forget everything I’d ever seen, and just come in with it fresh, and not feel that pressure of having to do justice to this beloved story. It just felt like it was much healthier and more fun and more exciting and more free just to approach it as though it was a completely original story and a completely original character; and not feel beholden to any of the shit you’d seen before, you know?

Can you elaborate on Guy shooting the whole film in four hours on a stage?

HUNNAM: I think there were several elements as to why it was useful to him. First and foremost it was sort of like a table read, but where he could actually see everything edited. Sort of like an elevated table read. Just to see the pace and the tone and a little bit of the dynamics between the characters. So that was the pre-production benefit of it. As we’ve gone on and they’ve been assembling different sequences that we’ve been shooting, we’ve been able to fill in the gaps with that stuff. So from about halfway into the filming they’ve had the whole film sort of edited with those sections that we hadn’t shot yet filled in with that four-hour thing. Which has been really interesting and helpful to Guy. He’s been going back and rewatching the film quite a lot. I’m sure if you talk to him there would have been other benefits too. But they were the obvious big ones. END_OF_DOCUMENT_TOKEN_TO_BE_REPLACED

I’ve uploaded blu-ray captures of Charlie from the 2013 sci-fi adventure film Pacific Rim which starring Idris Elba, Charlie Day, Rinko Kikuchi and directed by Guillermo del Toro. You can view them in the gallery now. 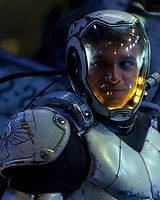 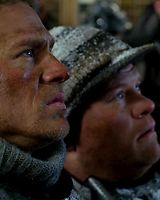 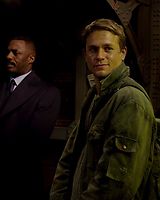 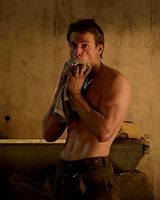 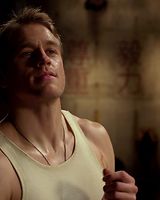 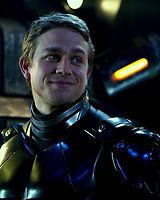 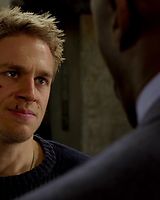 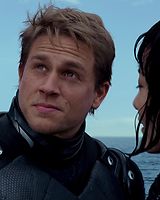 Pacific Rim 2 is now shaping up as Charlie Hunnam confirms his reappearance in this sequel as Raliegh! Guillermo del Toro, the director, even gave a glimpse of this character as he shared:

“We are taking the characters into a completely different journey this time because Raleigh (played by Hunnam) for me solved his problem the minute he was able to go full circle and save Mako by sacrificing himself, which is what he couldn’t do with his brother. He’s not on that journey anymore, he’s on a new journey,” (via IB Times).

“I just love it. It’s an experience that you can’t get any other way.”

The next Pacific Rim will allegedly have a different feel this time. According to the director Guillermo Del Toro, they are currently formulating ideas that are not the usual route. The film will allegedly highlight different parts of the world to give it a different feel! He even told The Wall Street Journal:
“All of this happens prior to the first movie, and it gives you a little more depth into the background of certain characters that will appear in the second movie. So by the time the second movie comes out, you will have probably one year of the animation airing, and you will have three years of the comic book series ongoing.”
“The series tackles the stories that happened to pilots working in the Shatterdome, but also cadets learning how to become pilots,” he shared.

“It was hard to create a world that did not come from a comic book that had its own mythology, so we had to sacrifice many aspects to be able to cram everything in the first movie. Namely, for example, ‘the Drift,’ which was an interesting concept,” director Guillermo Del Toro told The Wall Street Journal.

Legendary Pictures CEO Thomas Tull said earlier this year that he considers Pacific Rim a financial success, especially considering the fact that it was an original IP. There were further good signs this summer when del Toro revealed that he was working with Zak Penn on writing a sequel, and now Universal has officially announced that Pacific Rim 2 will arrive in 3D and IMAX theaters on April 7th, 2017.

“The characters I love will return. Raleigh, Mako, Newt, Gottlieb and who knows, maybe even Hannibal Chau – but we are taking them into a fresh territory that will display amazing sights and battles. The first film set the stage and now we’re ready to have a blast.”

The co-writer and director didn’t give away any further details about the plot of Pacific Rim 2 in his video announcement but he did sound very pleased by the deal, saying, “We’re all very happy to be bringing you more Kaijus and more Jaegers kicking each other’s butt.”

Pacific Rim 2 Script In The Works

I’m very excited to hear this news personally and hope that it actually becomes a reality!

Buzzfeed recently chatted with director Guillermo del Toro about his upcoming television series The Strain, which will premiere on FX. During their discussion Buzzfeed asked him about the possibility of another Pacific Rim film. “I’m working very, very hard with Zak Penn (“The Incredible Hulk”),” he told Buzzfeed. “We’ve been working for a few months now in secret. We found a way to twist it around. Travis Beacham [co-writer of the first film, now working on Fox’s Hieroglyph] was involved in the storyline and now I’m writing with Zak because Travis has become a TV mogul.”

At this time, Legendary Pictures has not given Pacific Rim 2 the greenlight. In March, Legendary CEO Thomas Tull told Collider, “It did north of 400 million dollars globally and both the home video sales and the merchandise have way over-indexed, so it seems like fans really loved the world. So we’re going to sit down with Guillermo and as long as we think it’s authentic and there’s something to say, we’re certainly open to it.”

As for the script, del Toro revealed that Jaeger pilots, Raleigh Becket (Charlie Hunnam) and Mako Mori (Rinko Kikuchi), are involved in the storyline. Clearly, that means it is a sequel and not a prequel as many had speculated it might be. “Some people were wondering if we were going to do the prequel. I was never interested in doing that first wave of invasion,” del Toro said. He concluded with this spirited message about Pacific Rim 2: “I’m going for very new, very crazy ideas on the second one, which are very different from the first one — but you will get really great spectacle.”