Charlie discusses Vespa vs Harley, the Brad Pitt Curse and more with ELLE.COM! 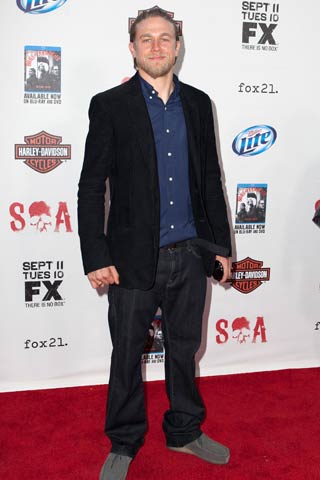 On the “Brad Pitt” curse: “I was playing pretty boys and these angelic roles like Nicholas Nickleby and all that stuff. And I was like, ‘What am I doing? This isn’t who I am, as a man or an artist.’ I had to overcome people’s belief that I was too pretty to be a badass.”

On initially resisting the role of Frankie: “It seemed too much of a stretch. I’ve been playing Jax Teller for so long and these other aggressive roles. I thought it would take me awhile to get out of that and into a place where I could play this meek, put-upon, dorky guy.”

On Vespa versus Harley: “I don’t think I’ve been on a Vespa? Oh, that’s right…for this movie! I have two motorcycles. This is my pride and joy [reveals a picture of his Harley Davidson].  No comparison. I would rather be the guy steering the big Harley. It’s empowering and makes you feel like a badass. [The Vespa] is really humiliating and makes you feel like an idiot.”

On similarities to Jax Teller: “A lot of my friends are gangsters. Not like gangsters–well, yeah, all sorts of levels of criminality—but not the types that are preying on innocent people. I have no interest in the type of criminality that has no respect for collateral damage. But I don’t condemn the guys who say,  ‘This society we’ve created is kind of [messed up], and I’m willing to take it down—for selfish gain—but also to make a point.'”.

On receiving jewelry from his girlfriend: “She told me she was making me a diamond encrusted ring—she’s a jewelry designer, not an actor—and I was like ‘Uh-oh. This is not going to go well for me.’  But I love it. It’s so discrete and beautiful. Her company is Maison de Morgana.

Charlie Talks with Playboy.com about ‘Frankie Go Boom’, ‘Sons of Anarchy’ and more!