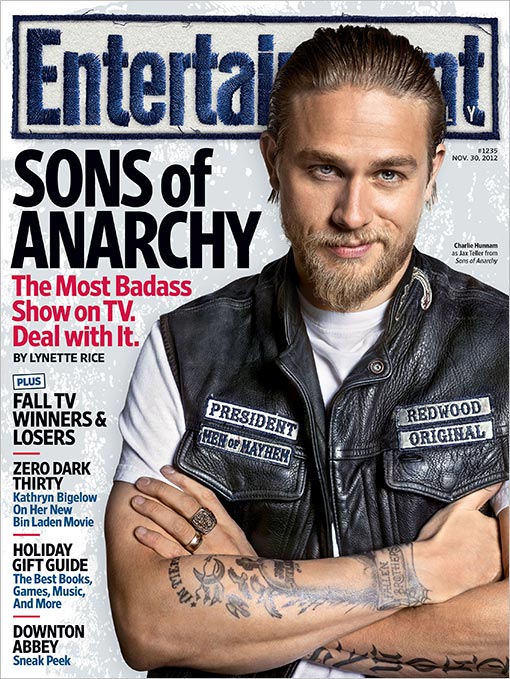 You can purchase your issue here at EW.COM!

Just because he’s the mastermind behind FX’s most-successful series ever, doesn’t mean that Kurt Sutter is the picture of serenity these day — especially in the editing room. If there’s one thing that makes the executive producer’s job more difficult than ever, it’s finding a way to wedge in all the great performances into one 44-minute episode of SOA.

Most times, he can’t — which is why the network has been “really generous on time” by giving Sutter four 90 minute-episodes to wrap the drama’s fifth season, ending Dec. 4. But he still had to make tough choices. “I just can’t get it all in,” laments Sutter to EW. “It’s interesting because my scripts keep getting tighter in terms of page count and yet I keep getting directors cuts that are longer and longer. A scene that would normally play out in two minutes now takes like 3½ minutes because they’re much more emotionalized. It’s really about letting those scenes breathe so they can have the life they’re supposed to have, because there is so much more at stake.”

In this week’s issue, Entertainment Weekly goes behind the scenes of the series that’s in the home stretch of its fifth suspense-filled season to find out the real inspiration behind the drama (hint: it involves the classics!), who helps Sutter with all those little motorcycle club details, and why cast members like Charlie Hunnam (Jax), Kim Coates (Tig), Tommy Flanagan (Chibs), Mark Boone Jr. (Bobby) and Theo Rossi (Juice) bond so well on and off screen.

And for more on SOA, keep checking back to Inside TV where we’ll feature exclusive interviews with Ryan Hurst (Opie), who talked about his character’s tragic death this season, and Hunnam, who explains why he stopped talking to Ron Perlman (Clay) this season!